Is the NFL ready for a gay player?

Share All sharing options for: Is the NFL ready for a gay player? 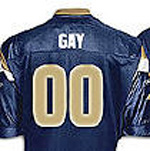 The League, an NFL blog run by the Washington Post, has a terrific debate going on about whether the NFL is ready for an openly gay player. I was one of nine voices the Post sought for comment, along with other writers and three former players -- Roman Oben, Ken Hutcherson and David Kopay (who came out in 1975). By far the most incendiary, stupid and offensive piece is from Hutcherson, a former Seahawk turned rabid anti-gay activist. Hutcherson (a minister) actually compares having an openly gay player with having a girl on the team.

Men are going to be more comfortable with other heterosexuals. It's like having a woman on the team or having a woman in the shower. How can you keep your mind on the game when you're thinking about running back to the showers? ... What if a guy went out for the girl's volleyball team? It's just commonsense... but I don't know why they call it commonsense anymore because it's not very common.

Of course, my analysis yielded one comment so far; Hutcherson's hate speech has gotten 70 and counting. It is worth reading all the views and thanks to Emil Steiner for inviting Outsports to contribute. I'll leave the last word to my great friend Dave Kopay:

Sexuality is a personal and complicated thing. You can't define somebody by a word. Love doesn't have a gender, it's love period. I know that. I knew that when i was married, I knew that when I was in the closet and I know that now... it's just love.