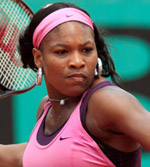 I consider myself a big fan of Serena Williams (and her sister Venus, too), but some of her antics leave a lot to be desired. Last month she told the world that the WTA's No. 1 player, Dinara Safina, wasn't the real No. 1 player in the world: Serena was (of course, she then lost in her next tournament that Safina won). Then, after her French Open win over Maria Jose Martinez Sanchez, Serena accused her opponent of "cheating" because she didn't forfeit a point when a ball hit her in the arm. Serena herself summed it up perfectly; Unfortunately, drama queens simply can't get out of their own way: