Federer Makes Second Round at Wimbledon

Share All sharing options for: Federer Makes Second Round at Wimbledon 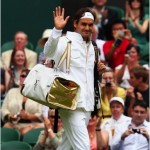 Roger Federer made his Wimbledon Centre Court debut today in his usual flair (couldn't Nike get him a better bag this year?) for his match against Chinese Taipei's Yen-Hsun Lu and his quest for a sixth Championship and record-breaking 15th major.

Fed also debuted the gear I previewed last week but it's what was covering those duds that made the story. He came out working a military style jacket featuring patch pockets on the front and white warm up pants while underneath he wore a sneaky white vest with gold piping.

Good thing for the RF's every-friggin-where or he might have been mistaken for staff at The All England Club. Phew.

All in all, it's very "Fed at Wimbledon" though the military themed jacket paired with a tailored vest is a strange combo.