Share All sharing options for: 'Training Rules' director speaks out 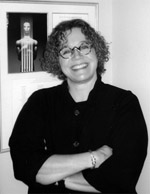 Training Rules producer and director Dee Mosbacher wrote a short piece about how homophobia still rules in sports. In it she talks about the prevalence of homophobia in women's sports despite the advances that society and some in sports have made. She lays out succinctly the biggest difference between gay men and lesbians playing elite sports in the closet:

Unlike men's basketball, where concern about a player's sexuality is rarely addressed, it's common practice in women's athletics to raise the specter of lesbian players and coaches.

Mosbacher's piece does have one inaccuracy: She says that Sheryl Swoopes was the first basketball player to come out of the closet, but Michele Van Gorp and Sue Wicks both came out before she did, on top of many former college basketball players. Still, Mosbacher and her film have become strong advocates for equality in sports and we salute her for that!

Five years ago, I decided to make a documentary about homophobia in sports. Although a few professional sports icons, like Billie Jean King and Martina Navratilova had come out as lesbians, I wanted to understand why athletes seemed to feel being out was unsafe when lesbian and gay visibility was increasing everywhere else. In 2005, WNBA star Sheryl Swoopes became the first basketball player to come out of the closet. Later that year, an outstanding Division I basketball player, Jennifer Harris, was thrown off her college team because her coach believed that Harris was a lesbian. When Harris decided to sue the coach, athletic department, and university, she became the focus of the new documentary I co-produced and directed with Fawn Yacker, Training Rules.

Jennifer Harris was a premed student and a very good player at Penn State University. She would have been the leading scorer on her team at the beginning of her junior year. Instead, after the last game of her sophomore year season, she was cut from the team by Coach Rene Portland, who had a long history of discriminating against any player she suspected might be lesbian.

Penn State settled the Harris case, but that didn't bring an end to homophobia in women's sports, nor is Penn State the only school that has allowed such practices--far from it. And so far there is only one out lesbian who is the head women's basketball coach of a Division I school.

Unlike men's basketball, where concern about a player's sexuality is rarely addressed, it's common practice in women's athletics to raise the specter of lesbian players and coaches. You would think this has changed, since five states recently extended marriage rights to same-sex couples. But with the prospect of losing their scholarships and being cut from their teams, very few student athletes feel safe enough to come out. Clearly, we still have a long way to go.

Training Rules is a painful reminder that homophobia still exists in women's sports. The Penn State players featured in the film represent many others throughout the world of college athletics whose careers have been terminated because of homophobia.

It's time to level the playing field. All athletes deserve to compete unencumbered by the fear of discrimination based on sexual orientation.