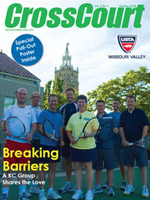 The USTA's Missouri Valley magazine CrossCourt has a new story up about the Kansas City gay tennis group, the Kansas City Tennis Alliance. They even put the group on the cover of the magazine with the headline: Breaking Barriers, A KC Group Shares the Love. The magazine features tennis for all ages and all types, and it's really cool that the USTA would put a gay group on the cover of one of their regional magazines.

After some initial research into organizing the group, [group organizer Brian] Sullivan came across the USTA's Diversity Statement and its inclusion of sexual orientation, and soon contacted the Missouri Valley's diversity manager, Fred Johnson.

"For me and the USTA, it's all about playing tennis and Brian wanted to organize this diverse group of players and we were happy to help," Johnson said.

Kudos to the USTA for seeing gay athletes as just another group of athletes to help! And also to Richard Dedor, who wrote a smart, insightful article.