Share All sharing options for: Vernon Davis loves being a fashion plate 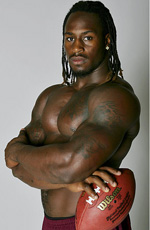 San Francisco 49ers tight end Vernon Davis might have the best physique in the NFL -- tall, sculpted, all muscle. But he "hates that they don't have enough high fashion designers for guys with my build." It seems like an odd complaint until you realize that Davis is very much into clothes and looking good and even fesses up to carrying a "murse."

In an interview with Honey magazine -- whose editors gushed over his "bulging biceps, ripped abs, and tight buns in the latest Ferragamo v-neck and Dior jeans" -- Davis discussed his love of all things fashion.

Honey Magazine: Most underrated/overrated designers?
Vernon Davis: Dolce, Gucci and Louis Vuitton make excellent accessories and leather goods, but it's usually hit or miss with me. I'll contradict myself here, but I got a chance to preview Gucci's menswear Fall ‘09 and woooo! An underrated designer, in my opinion is Salvatore Ferragamo the classic loafers and dress shirts mixed with their trenches is dope.

Davis reveals that it takes him an hour to get ready to go out (about 45 minutes more than it takes me) and discusses how his teammates see his sense of style.

Honey: Do you get any grief from your fellow teammates for being into fashion?
Davis: Sometimes [I do], because they can't see themselves wearing a lot of the stuff I wear. They think it's too different: jeans that are a tailored to my body, Swarovski crystals on the back of my jeans, the color combinations I choose and some of the sneakers that I decide to wear. I once wore a blazer that was made out of Godiva wrappers that this young designer asked me to wear. I thought it was extremely different, but that's just the lane I'm in - separate from everyone else.

As for the man purse, Davis says he carries it only "when I am going to the beach, pool party or outdoor event." Davis now joins hockey's Sean Avery as pro jocks that are gayer than me.