Sharapova stunned in Wimbledon's Second Round

Share All sharing options for: Sharapova stunned in Wimbledon's Second Round 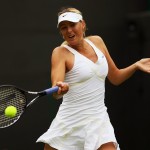 Maria Sharapova's road to recovery hit a major speed bump as she was knocked out of Wimbledon's second round.

The 24th seeded Russian glamazon, who lost out in the same round last year, was defeated by Argentine Gisela Dulko 6-2, 3-6, 6-4 and was the victim of 9 double faults, 27 errors, and a determined opponent. Moreover, Shrieka had her chances but was only able to convert on 4 of 11 break chances. Ouch.

Even though she's only two months into her return after a 10-month shoulder injury absence, this loss will be a tough pill to swallow for the 2004 champion who considers grass her best surface. In fact, she performed better at Roland Garros making the quarterfinals on her least favorite surface. But she still seems to be getting comfortable with her shortened service motion as evidenced by her DF count and low MPH on the delivery.