Athletes and the golden age of beefcake

Share All sharing options for: Athletes and the golden age of beefcake 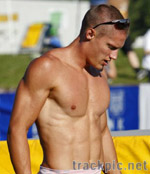 The Village Voice's latest Pride issue features a piece by the indomitable Steve Weinstein about the golden age of beefcake. And with more and more athletes willing to strip down to their skivvies (or less), sports hold a growing role in that.

Even the hyper-masculine world of professional sports has become a fertile ground for beefcake. In 2001, a calendar called Dieux du Stade showed nude French rugby players. It has since grown into a mini-industry of its own, with books, DVDs, and TV specials. Along the way, it's also helped popularize the sport.

Steve and I chatted at length about the article, and he even quoted me. Steve's had his eye on this subject for many years: He even loaned me the first Dieux du Stade video, which I somehow have forgotten to give back to him. Another great, timely piece by one of the most cutting-edge gay writers in the business.