Share All sharing options for: U.S. shocks Spain in soccer 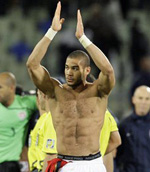 Oguchi Onyewe of the U.S.

This has to be one of the bigger sports upsets in a while: The U.S. men's soccer team beat Spain, 2-0, to reach the finals of the Confederation Cup in South Africa. How dominant had Spain been?

It was the first defeat in 35 internationals for the European champions, a run stretching back to November 2006. It also ended Spain's world record of 15 successive wins.

I am bummed that I forgot the game was on, so would love to hear from people who did watch it about the type of win it was and what it says (if anything) about the U.S. chances leading up to the 2010 World Cup.