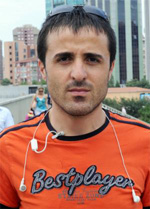 How much are the attitudes of people in sports and the general society toward gay people changing? The gay Turkish soccer referee who was outed and fired by the Turkish football federation, Halil Ibrahim Dincdag, is fighting back and has found a groundswell of support, all thanks to the fact that he didn't hide but embraced his sexuality and stood up for himself. From the UK's The Independent:

Mr Dincdag's television appearance was an act of considerable courage. Homosexuality is not illegal in Turkey, unlike in some other Muslim countries. But homophobia is widespread, no-where more so than in the world of football. 'The crowds shout 'faggot' at referees whose decisions they don't like,' Mr Dincdag said. 'Well, here I am.' His principled stance brought him a wave of support.

He's now suing the federation for firing him.