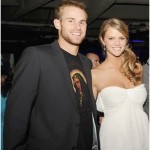 Me thinks Andy Roddick and his wife, Brooklyn Decker, need their own Twitter reality show.

The couple, affectionately known as "Broddick", have been having a public war of words about a few of their musical guilty pleasures after A-Rod outed Brooklyn's penchant for bubble gum pop saying via tweet:

brooklyn listens to the worst music. house rule thats going into effect.. she is not allowed to bring her ipod into the kitchen common area

britney spears, miley cyrus, taylor swift, i feel like its a 24 hour loop of the disney channel

She, of course, retaliated by defending her questionable tastes while exposing A-Rod's love of a certain 80's crooner and knowledge of boy band dance moves:

Andy never admit it but he knows the lyrics to "Love Song" 1 time I got him to sing it in the car with me. I heart Disney channel, so what?

One of his favorites is Rick Astley (enough said) He knows a few NSync dances, And he LOVES Kelly Clarkson.. I promise he is far worse.

When asked about the war of words with his wife after his second round match at Wimbledon yesterday, A-Rod responded by saying,

What do you want me to say? I said I wasn't proud, but I'm not going to lie to anybody. I busted my wife on some of her ... music. She brought up Rick Astley. I can't deny it. It's in my iPod. I bet it's in your iPod, too, so shut up.

I have NOTHING like that on my iPod. Pinky swear.

On a side note, I'd die to see A-Rod pull a Justin Timberlake. But does JT pull at his junk too?