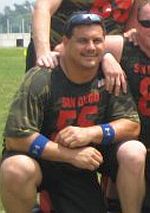 Jorge Lopez, with his San Diego flag football team at the 2006 Gay Games.

Tragedy struck at the second annual Pride Bowl gay flag football tournament in Chicago, when Jorge Lopez, a player for the Michigan Panthers, passed out on the sidelines during a Friday game and died shortly thereafter. The cause of death, while not confirmed, was believed to have been a heart attack.

Lopez, 41, fell ill during a game against the New York Pieces Bulldogs that began at 11:15 a.m. He was playing quarterback for the Panthers, had just thrown a touchdown pass and collapsed after walking to the sidelines, a witness said.

“He passed out cold during the game and died in the ambulance on the way,” to the hospital, said Shawn Albritton of the Chicago Metropolitan Sports Association, which sponsored the tournament, held at Montrose Beach. “This is so sad, I’ve never been a part of anything like this.”

The game against the Bulldogs continued while Lopez was on his way to the hospital. Tournament officials informed the Panthers about Lopez’s passing during halftime of its second game against the Denver Summit, and the team elected to finish the game.

"He really was a sweet, sweet man and a gifted athlete," said Molly Lenore of Lopez. Lenore, a player for another New York team in the tournament, played in several softball and flag football tournaments against Lopez.

Lopez had previously played gay flag football while living in San Diego. He was living in Oxford, Miss., with his partner.

Some of Lopez's former San Diego teammates eulogized him on their Facebook pages.

I love you Jorge, I will truly miss your competitiveness, GREAT smile and wonderful heart. You have always been a GREAT friend and the best teammate one could ask for. I will always remember our fond memories of all the football and softball tournaments we played in. RIP my friend!

I love you Jorge - I am sure you are in heaven playing football. You were an amazing athlete (football player) and MAN. Miss you so much xoxoxoxo.

Rest in peace Jorge ... I have rarely met a better guy and a sweeter soul than you. I am sad I will never get to experience that again.

Todd Hicks from his Michigan Panthers team sent me this touching tribute:

Sometimes people come into your life and you know right away that they were meant to be there, to serve some sort of purpose, teach you a lesson or help figure out who you are or who you want to become. You never know who these people may be and when you do, you soon realize that they will affect your life in some profound way. Jorge did that for me.

Jorge taught me that life is about the simple things, like a smile, a hug, a sunny day or a good laugh. Sometimes things happen at a time that seem horrible, painful and unfair but, upon reflection, you realize you were blessed to of known such a person and have them in your life. The people we meet affect our life and Jorge affected mine in many ways. He was a teacher of simple things and I felt like a student.

When someone loves you, love them back, unconditionally, not only because they love you, but because they are teaching you to love and opening your heart and eyes to the simple things. Make every day count. Appreciate every moment and take from it everything that you possibly can, for you may never be able to experience it again. Jorge taught me to live in the moment, because that is all we truly have. His smile could warm anyone's heart.

Playing football with Jorge was truly a joy. He played hard, but reminded you to have fun. Off the field he was compassionate and personable. I thank you Jorge for being in my life and creating special moments that I will cherish forever. I will take comfort in knowing that your spirit will be with me always. To honor Jorge, I must now become the teacher of simple things. This I will do so proudly.

Ross Forman contributed to this report.