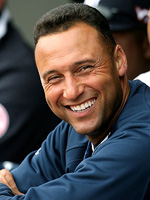 I've never understood why so many women think Derek Jeter is the hottest athlete around, but he's again been named their hottest baseball player in an informal poll. I've been wondering if it's due to the label of "hot athlete" that straight men in the media have given him. Because he's a passable guy for straight men in the media to say, "He's a good-looking dude," since he first started playing with the Yankees ESPN and Sports Illustrated and the like have propped him up as the beacon of hotness among athletes. They can easily dismiss it as him banging so many hot chicks and being the captain of the New York Yankees: Those things give them cover to actually say the guy is hot.

Jeter isn't an ugly guy, but for me he's just not anywhere near the best-looking baseball player, let alone the best-looking athlete. I'd take either of the other guys who finished in the top three -- David Wright and Cole Hamels -- over Jeter. But at the end of the day, it is a matter of taste. I guess this just means I'm not a straight woman. Phew!