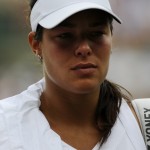 Ana Ivanovic's Wimbledon campaign came crashing down in a pool of tears today after suffering a mid-match injury in her fourth rounder.

The Serb was down a set down to Venus Williams and serving at deuce when she felt a sharp pain in her inner thigh and called a trainer. She managed to hold serve after the treatment but then walked to the chair.

She was asked about it in her post-match presser:

Q. Did you have the problem in the first set?

ANA IVANOVIC: No, no, nothing. I didn't feel anything up until that point. Over past few days I felt muscle tightness, but that was, you know, normal after playing so much on the grass.

Just when I was serving 30‑40 down in that first game, and after my first serve when I landed I just felt a sharp pain on my inner thigh and I couldn't step on my leg ever since.

V was sympathetic towards the Serb's struggles today:

You know me. I only pay attention to what’s going on my side of the net – but today I felt really sad for her.

She was really upset. I think she was in a lot of pain. This is Wimbledon. It’s the last place you want to have an injury that you can’t overcome. So I’m wishing her a lot of luck in her recovery.

It happened in that last game. She’s tough and tried not to show it. But professional players are always in a little bit of pain of some sort. So you get used to the pain level but I guess it was something she couldn’t work through.

Ugh - another major setback for the former top lady baller. Clearly the Serbian Slump is in overdrive now with Jelena Jankovic struggling to find any form after getting knocked out by a "woman problem" named Melanie Oudin on Saturday.

What a difference a year can make in tennis. *sigh*