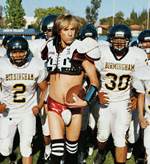 Los Angeles Unified School District officials are upset, the L.A. Times reports, that members of the Birmingham High football team participated in a photo shoot with "Bruno," the flamboyantly gay character played by comedian Sacha Baron Cohen. (Some photos below).

A slide show on the GQ website shows Cohen cavorting with the uniformed players while wearing shoulder pads, tight red shorts, an athletic cup and little else. In one shot, the "Borat" star is lying on top of a player he has evidently just "tackled."

District officials, beginning with Supt. Ramon C. Cortines, were not amused. "We've allowed our students to be used, and not in the most glamorous circumstances, either," he said.

I saw no photo of Bruno lying on top of a player, which could mean that GQ yanked it thinking it was inappropriate.

LAUSD officials need to lighten up. I guarantee the players were jazzed to spend the day with Bruno, and were not clueless enough to think he was something other than a character played by an actor. The pictures play on highly exaggerated stereotypes, which is the whole point of Bruno. The movie opens July 10 and I will reserve final judgment until I see it. Some gay groups are worried that the joke will sail over the heads of many and reinforce homophobic feelings.

You can view the slideshow and make your own judgment. Two photos from the GQ spread below: 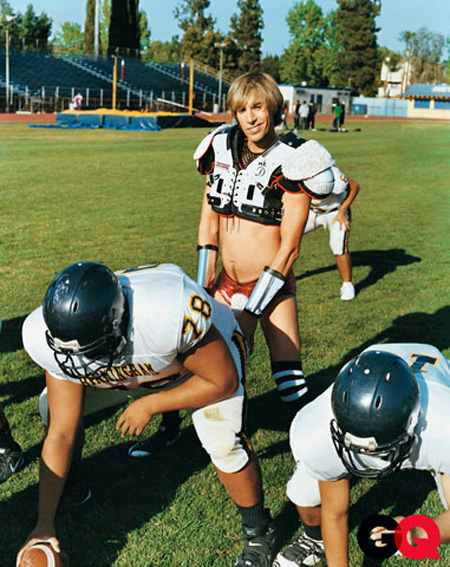 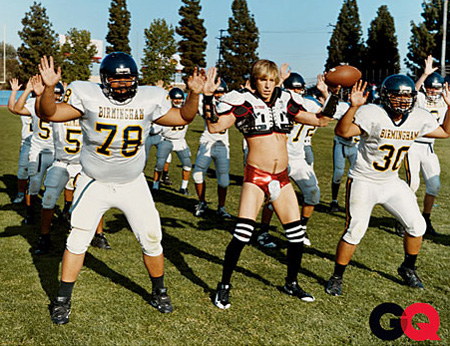