Federer wins the French, is he the GOAT?

Share All sharing options for: Federer wins the French, is he the GOAT? 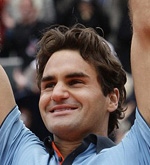 Roger Federer survived some rain, an idiot fan on the court and Sweden's Robin Soderling to win the French Open in straight sets and become only the sixth men's player to win all four Grand Slam titles in a career. The debate has been renewed as to whether Federer is the Greatest Of All Time.

There will be no asterisk behind Federer's first French Open title, which ties him with Pete Sampras as the only two men to win 14 career majors. Federer's nemesis Rafael Nadal was not facing him in the final, but that was because Nadal was beaten earlier by Soderling. So while Federer caught a break in avoiding Nadal, he easily dispatched the player who dumped Nadal. Now the debate has shifted to the GOAT and whether Federer can claim that crown. Sampras says yes.

"Now that he's won in Paris, I think it just more solidifies his place in history as the greatest player that played the game, in my opinion," Sampras said. "I'm a huge [Rod] Laver fan, and he had a few years in there where he didn't have an opportunity to win majors. But you can't compare the eras. And in this era, the competition is much more fierce than Rod's."

I say there's no way to ever determine the greatest when one is talking about athletes from different eras. Laver won two Grand Slams and 11 majors and was barred (due to archaic rules) from playing in these majors for five years at the height of his abilities.

One also must consider different equipment and the skill levels of contemporaries when making such equations. How would a Federer have fared against a Jimmy Connors or Bjorn Borg in their prime, or a Laver on clay against Nadal? These are nice fan discussions to have, but ultimately unanswerable.

As for the brief ruckus, a fan carrying a Barcelona soccer banner ran onto the court (photos here) and tried to place a red hat on Federer. He was eventually tackled by security and hauled away. Fortunately, his intrusion did not affect the match.

My question: Is Federer the GOAT? If not, why not?