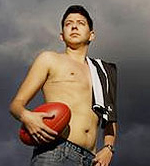 An Aussie Rules Football fan is hoping to become the first transgender person to play competitive football Down Under. In an article Sunday with The Age, Will (doesn't give his last name) said he's spoken to a former captain of the Collingwood Football Club, Nathan Buckley, who supports Will's attempt. Will has also met with the president of the Victorian Country Football League, who has cleared the path for him to try to make a roster. Will has had a double mastectomy and is taking hormones. Will told The Age, jokingly:

There might be a bit of resentment there, particularly if I turned out to be better than one or two players. They would probably hold that against me because they'd be thinking, 'God, he doesn't even have a penis and he can kick the ball better than me'.