Share All sharing options for: The Bengals' 'Brokeback Mountain' couple 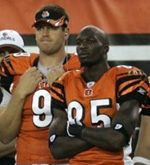 Carson and Chad: I wish I knew how to quit you.

"I know people are trying to say we're mad at each other and all that, but we're good," he told Bengals.com. "We're like Brokeback Mountain. I'm going to be with Carson so much in July that I'm going to be the nanny [for his new twins]. I'm going to babysit. We were getting down to the details. If he and the wife go out, they have to be back by three. I asked for permission to have company over."

It appears that Ochocinco is missing what "Brokeback Mountain" was about, or maybe not. Perhaps he (Jack) and Palmer (Ennis) have a torrid covert sexual relationship on the side, with Carson's wife playing the Michelle Williams role.