Share All sharing options for: Video: Soccer player jolts up after heart attack 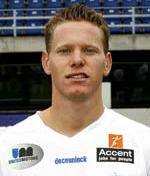 We're all used to seeing soccer players flop on the ground to draw a card on an opposing player then pop up from the ground like nothing happened. So when I saw the headline, I figured that's what this was. Nope. Apparently, Belgian player Anthony Van Loo (who is totally hot, if you like blondes) suffered a heart attack during a recent match. He had had a defibrillator implanted in him last year after learning of a heart ailment, and the defibrillator gave him a jolt that likely saved his life. The video's odd, disturbing and somehow emotionally satisfying all at the same time.