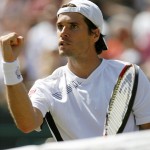 Tommy Haas made good this time against one of the big boys.

At the French Open last month, the German baller was up two sets and held a break point against eventual champ Roger Federer and caved in five. And today, HotHaas was up two sets on Novak Djokovic in the Wimbledon quarters, lost the third but closed out an impressive 7-5, 7-6 (6), 4-6, 6-3 over the fourth seed.

After the big win he told the press,

You never know what’s around the corner for you if you keep believing and keep fighting. Who would have thought I’d be in the semifinals here at this stage of my career?

If you would have told me two years ago that ‘you can’t play him in the fourth round but you’ll be able to play him two years from now in the semifinals,’ I would have said, ‘Fine.’ It was a tough injury I had here, but life is crazy and this sport is crazy.

True enough HotHaas - congrats on the big win and making your very first Wimby semifinal at the tender age of 31. *cheers*

As for Nole, well, it's not the racquet switch or physical fitness this time. Quite simply: THEY'RE ONTO YOU. These ballers know your game inside and out, know what you do well (get every ball back) and won't you don't (no "kill" shot.) No one's surprised by anything you do on the court now.

My advice: You'd be wise to build your game and strategies around your backhand, especially your down-the-line shot. You're not using it effectively enough on the big points and your opponents are getting away with it. Just a thought. 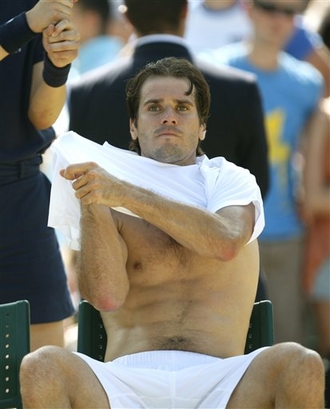