SI snubs Federer on its cover

Share All sharing options for: SI snubs Federer on its cover 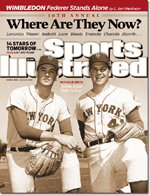 Roger Federer becomes the first man to win 15 Grand Slam titles. Virtually every commentator talking about it dubs him "the greatest men's tennis player of all time." The match that puts him over the top ends with a 16-14 tiebreak in the fifth set of Wimbledon, the sport's crowning glory. And days later, Sports Illustrated puts a black and white photo of two baseball players who haven't played in over 15 years on the cover. Sure, at the top is a lousy headline, "Roger Stands Alone," but the man just pulled off one of the greatest accomplishments in the sport (if not the greatest accomplishment): How do you not put him on the cover? I know they want to promote their "timeless" 'Where Are They Now' series, but not putting Federer on the cover was a questionable decision at best.