Share All sharing options for: UFC fighter Brock Lesnar is a jackass 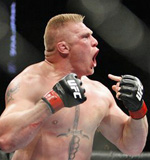 I have had a strong dislike for former WWE wrestler and now Ultimate Fighting Championship star Brock Lesnar after he told ESPN the Magazine in 2004, "I don't like gays. Write that down in your little notebook. I don't like gays."

So it was no surprise to see what a total jackoff he was during and after winning the UFC heavyweight title Saturday night over Frank Mir in the big UFC 100 PPV card:

In just his fifth MMA fight after a winding athletic path through college wrestling, fake wrestling and the Minnesota Vikings' training camp, Lesnar first refused to touch gloves with Mir. The hulking 265-pounder spent most of the fight's two rounds on top of Mir, using his weight and wrestling skill to wear down Mir's defenses, before finishing with a relentless series of right hands to Mir's face.

Lesnar (4-1), who lost to Mir last year, then taunted his fallen opponent while Mir still sat on his stool, his face bloody and swollen. When the Mandalay Bay crowd booed, Lesnar made a two-handed obscene gesture, followed by a rambunctious interview in which he insulted a prominent UFC sponsor and made an off-color comment about his own wife.

Lesnar was popping the middle finger to the crowd and then boasted that "hell, maybe even later, I'll get on top of my wife." He then insulted sponsor Bud Light by saying he preferred Coors Light because "Bud Light won't pay me."

Lesnar got a tongue-lashing from UFC President Dana White, furious that Lesnar's antics would hurt a sport trying to push more and more into the mainstream; this looked more like a pro wrestling circus than a true sport. Lesnar claimed he got all excited trying to hype the PPV card, but White wasn't buying it, saying he was "blown away" by the fighter's antics and bad sportsmanship.

The fighter issued a post-fight apology, more motivated I would guess by White's blasting him (with whatever threats were involved) than any true contrition. Once a jackass, always a jackass.