Share All sharing options for: Athletes stay closeted for the golden ticket 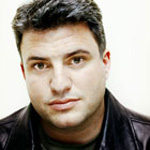 Sports columnist Dave Zirin (right) is the latest to tackle the "why aren't there any openly gay pro athletes" question in a new column that appeared a couple weeks ago in the San Francisco Chronicle. No new ground broken, though I did like how he plainly put the issue in a few quick sentences:

They have been led to understand that for a man, being gay means being weak, and being perceived as "weak" on the playing field means being done. They also disproportionately come from poor or working-class backgrounds. To risk their jobs is to risk their golden ticket.

The piece got a lively response from John Amaechi that was about twice as long as the column itself.