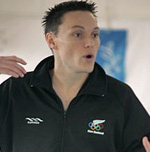 Logan Campbell, a New Zealand taekwondo athlete, figures he needs to raise $300,000 to compete in the 2012 Olympics, so he's opened a brothel with his 20-year-old business partner.

"When people think of a pimp they think of a guy standing around on a street corner with gold chains," he told the Sunday Star Times.

"Pimps are more tough-type guys. I'm an owner of an escort agency."

Prostitution has been decriminalized in New Zealand and brothels are allowed to operate. Even so, a Taekwondo New Zealand spokesman said Campbell's brothel might cause him to lose a spot on the international team.

"Selection takes into account not just performance but also the athlete's ability to serve as an example to the youth of the country," the NZPA quoted TNZ funding manager John Schofield as saying.

Yes, we must always think of the children!

I think Campbell is showing great entrepreneurial spirit and not breaking any laws. He finished in top 16 in the Beijing Olympics but says he is at a disadvantage over competitors who don't have to worry about raising money to compete. He does not want to burden his parents, who paid for the majority of his Beijing expenses. He even brought the girls to meet mom.

"Mum was hesitant but she met the girls, a couple came over to her house and she was sweet as. She realized they were just normal people supporting their kids and stuff," Campbell said.