Share All sharing options for: Richard Jefferson tosses fuel on the fire 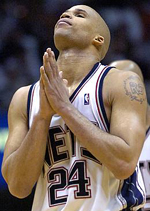 The name Richard Jefferson has been tossed around for years as a possible gay man in pro sports. MediaTakeOut breathed life in the rumors in 2006 when they said a black New Jersey Nets player was in a relationship with a man (Jefferson was with the Nets at the time). So when I read that Jefferson canceled his wedding planned for last weekend with just a couple days to spare, and that he didn't tell some of the guests invited to the wedding, it all smacked of strangeness and desperation. I'm certainly not the only one talking about it.

Do you think his odd behavior surrounding his wedding sends a mixed message?