Share All sharing options for: Beckham booed in U.S. return 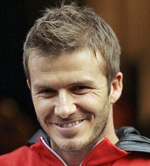 He was supposed to be the man who ignited a desire in Americans to watch soccer. Instead, fans of the game are now booing him as he takes the field. That's what happened last night as a crowd of 23,000 at the Meadowlands let Beckham know they didn't appreciate his apparent lack of commitment to soccer in the U.S. When he played there two years ago, there were 66,000 fans. Last year there were about 50k.

"Obviously the first year was impressive," Beckham said. "We're in a recession so, you know, maybe that's part of it."

I suppose that's one culprit. That or the fact that Americans aren't soccer fans and there's nothing Beckham can do to change it. Hmmm, which do you think it is?