Share All sharing options for: Serena edges Dementieva in thriller 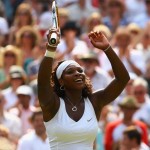 In a rematch of their semifinal in Oz, Serena Williams + Elena Dementieva met up in the Wimbledon semifinals and put on the best ladies' match of the YEAR and maybe the best match since Venus Williams defeated Lindsay Davenport to raise the Venus Rosewater Dish in 2005. A round of applause please! *clap, clap, clap, clap*

In an awe-inspiring display of Big Babe Tennis the pair traded blazing groundies and smacked huge serve after a serve in what could only be described as a high-quality slugfest to the finish. And in the end, ReRe edged out Elena 6-7 (4), 7-5, 8-6 saving match point in the longest semifinal in Wimby history.

The second seed's superior serve (including 20 aces) saved her in key moments while, according to ReRe, her forehand took a "vacation" apparently:

Q. You seemed to be coming off your forehand the whole first set. You weren't hitting through it.

SERENA WILLIAMS: I think that was for the whole match. My forehand didn't show up today. I think he went to Hawaii. (Laughter).

But I've called him and asked her, I should say, to come back for the final. Hopefully she'll be back.

Q. You did get it back occasionally.

But, you know, it's always good to win when one of your stroke's on vacation.

The Russian found nothing but positives to take away from this match:

Q. Is it a match you thought on merit you should have won?

ELENA DEMENTIEVA: Well, I think it was a very close match, and I think we both were playing very well today. It was a good fight.

Actually, I feel very satisfied the way I was playing today. The only regret I have, maybe I should take a little bit more risk on match point, should go down the line.

But overall it was a good match.

Q. Do you think this is the best match ever you have played on grass?

Just, you know, was not easy to fight against her. She's a great champion. She was, you know, serving very well today. You know, I wasn't sure if it's Serena or Andy Roddick on the other side, 125 all the time. You know, it was a huge percentage of the first serve.

You know, even with that I was able to break her a couple of times and I was in the lead in the third set. Like I said, she's a fighter. Me, too. So was a good match.

Q. You spoke beautifully the other day on how people are surprised you work to improve your game. Is this kind of moment why you work? Do you still, in your heart, feel you can win a slam in addition to the gold medal?

ELENA DEMENTIEVA: Well, I think only by playing these kind of matches you can improve, you know, because this is the players that I want to beat, to win a Grand Slam. And, you know, you have this experience playing very close match against Serena, I think it's very positive.

So I'm gonna watch this match again. I'm gonna take some positive, you know, things from it and go forward.

Okay, I was seriously dying with each intense point in this tremendous match - it was like GREAT sex. Well, not really but still an edge-of-your-seat, nail-biting thriller. Kudos to both lady ballers for giving us one to remember. 'Nuff said.

Wait, scratch that: V absolutely annihilated top seed Dinara Safina 6-1, 6-0 in the other semi. Great effort to get to your first Wimby semi D but you need to step it up in these big matches or step out. You're embarrassing yourself out there.

Anyway, onto the second consecutive all-Williams final at Wimby and fourth overall. Shouldn't they just take residence at the All England Club at this point?