Cink a villain, Watson a choker, or both?

Share All sharing options for: Cink a villain, Watson a choker, or both? 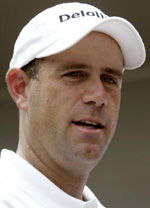 I've been surprised to see some commentators and writers talk about 2009 British Open champ Stewart Cink (right) as a "villain" because he beat Tom Watson in a playoff to win the Claret Jug. From what I saw, Cink didn't steal the title from Watson, the latter simply handed it to the younger Cink.

I got caught up in it too, hoping the 59-year-old Watson would pull it out. I was thrilled when he regained a 1-shot lead and held it going to the tournament's 72nd hole. After his drive, it looked like he'd be able to lock it up. And then Tom Watson choked.

From within 150 yards on the 18th hole, all Watson had to do was get it on the green and 2-putt. Instead, he whipped out his 8-iron (when the only thing he couldn't do was hit it over the green and he even said his instinct was to use the 9), and the ball went bouncing over the green. No worries: Up and down in 2, with a simple putt or pitch from the fringe and a tap in and he has the title. Instead, he hit it 9 feet past the hole. He now faced a makable putt. Instead, he seemed to rush the putt a bit, hit it very poorly and was in a four-hole playoff. And in that playoff he completely collapsed, approaching the fourth hole already down four shots.

How big of a choke was it? It doesn't quite put him in the Jean Van de Velde arena (who needed a double bogey on his 72nd hole exactly 10 years ago to win it and triple-bogeyed). But I'll remember this choke as much as I remember any of Phil Mickelson's laundry list of blown opportunities. As for Cink, I don't paint him as the villain. He left Watson some wiggle room and Watson didn't deliver. Don't blame Cink for that!