Via Deadspin I came across this silly yet addicting application from Stockholm Pride that analyzes a Twitter name and determines how heterosexual the person is based on certain keywords in their feeds. At least in Outsports' case, it's pretty accurate -- we are listed as being 1% hetero.

I was a bit thrown off though when Joe In Philly, a longtime Outsports poster and blogger, came back as 61% hetero, or twice as hetero as Cincinnati Bengals receiver Chad Ochocinco (31% according to Deadspin, but 1% when I did the search). Here is what the app says about Joe:

You seem to be a bit semi-hetero. Just like a chocolate chip ice cream you don't really know what you want to be. Basically it's a vanilla ice cream but what's the deal with the chocolate thingies? Luckily, most people like chocolate.

I think it's the Philadelphia part that threw off the app, or else Joe has some explaining to do.

Deadspin analyzed the Twitter feeds of dozens of athletes and here are some of my faves:

Both Penn and St. Pierre are mixed martial artists, and that sport is replete with homoerotic terminology. Either that, or Stockholm Pride knows something the rest of us don't.

Enter some Twitter accounts on the app (including yourself) and let me know how they ranked. Here is a screen cap from the Outsports ranking: 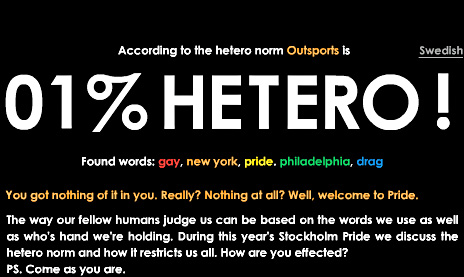