Phelps whines: Someone has a faster suit

Share All sharing options for: Phelps whines: Someone has a faster suit 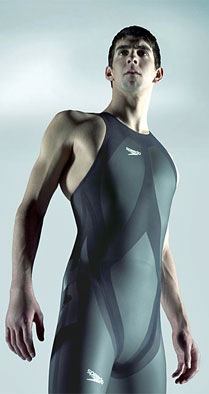 Maybe no man has benefited financially more from the ridiculous race to have the fastest swimsuit than Michael Phelps. Well, now the fastest suit is on another athlete. German Paul Biedermann beat Phelps in the 200m freestyle and broke his year-old world record wearing a suit that is all the rage, is brewing a controversy, and has the Phelps camp whining:

"It's changed the sport completely," Phelps said. "Now it's not swimming. The headlines are always who's wearing what suit."

Phelps' coach Bob Bowman said he and his athlete will take their ball and go home unless they have the fastest suit:

"Well, then, they can probably expect Michael not to swim until they've implemented it," he said. "I'm done with it. It has to be implemented immediately. The sport is in shambles right now, and they better do something or they're going to lose their guy who fills these seats."

Oh really? Was it swimming when Phelps had the fastest suit? I didn't hear any complaining when he was winning gold medals and cashing in after the Beijing Olympics wearing his own skin-tight suit.