Share All sharing options for: Roddick shocks Murray, to meet Federer in final 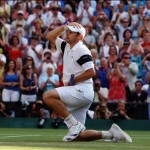 The emotional American wasn't sure he'd ever get this far at a major again:

Q. You said when you came off the court that you weren't sure, it's been a little while since you thought you'd make a Grand Slam final. Did you ever really seriously doubt that you would be back here?

ANDY RODDICK: Oh, yeah, yeah. Last year after I played here, I mean, that was a hard, hard couple of weeks.

You know, Brook and I had a lot of talks on where I thought ‑‑ if I still thought I could play and at least be, you know, towards the top of the game. I definitely openly questioned it at that point. You know, then the rest of the year I was kind of hurt.

So this off‑season, we said, You know what, if you're not gonna be up there, let's at least not wonder. Let's prepare yourself and give yourself every opportunity.

Q. Back to the conversation you had with your wife at the end of last year of whether you could play or not. What side did you take and what side did she take?

ANDY RODDICK: It was a year ago here. I was probably leaning towards not really playing that well. She didn't really know much about tennis, so she thought I was playing real great (laughter).

Q. And she convinced you?

ANDY RODDICK: Yeah, she thought I looked cute in the shorts.

HA - I concur. A-Rod, who fell to his knees after clinching the win, also took a moment after leaving the court:

Q. What happened to you on the stairs as you were leaving?

ANDY RODDICK: On the stairs? Oh, yeah. I think I just kind of wanted a moment maybe for myself. You know, as soon as you finish up a match like that, thanking the crowd and acknowledging the crowd, then you get shoved into this little room with a camera in your face and you get asked a bunch of questions.

I didn't know anybody saw that on the stairs. It was just kind of me taking a second to kind of try to make myself maybe believe that I was actually going to locker room having done that.

Q. Can you envision yourself lifting that trophy on Sunday as the winner here?

Q. Will you be able to move on from this, or do you think, you know, I lost to a better guy on the day?

ANDY MURRAY: No, I'll move on very, very quickly and go and work on my game and improve and come back stronger. That's a pathetic attitude to have, if you lose one match and you go away and, you know, let it ruin your year.

You know, I've had a very good year so far. I'm very close to, you know, the top of the game. The US Open I've always said is my best surface, my best chance to win a slam, and I'll give it my best shot there.

Q. You've talked for years about your feeling for the US Open. Has to be more than just the surface. What do you like about that tournament?

ANDY MURRAY: I've liked it ever since I went there as a junior. I played there the first time I think when I was 15 or 16. I love New York. It's one of my favorite cities to go to. The atmosphere on the courts is great. I love the center court there. You know, it's pretty incredible to play there when the crowd's full.

That's it. I really, really like the atmosphere there.

Ah, yes. A tremendous win for A-Rod and an intelligent one to boot. He worked all the court angles and played Muzz's game better than the Brit did today. And, although he goes into the final as the overwhelming underdog against Roger Federer (who defeated HotHaas 7-6 (3), 7-5, 6-3 in the other semi) you've got to give him a slight chance if he can thrown down those bombs another 75% of the time or more. Plus his backhand is MUCH improved and has uncorked it down-the-line with great effectiveness already this fortnight.

It will be the pair's third final meeting ('04, '05) at the All England Club with the previous two, of course, won by the Swiss.