Share All sharing options for: Hawaii coach hurls the fag-bomb at Notre Dame 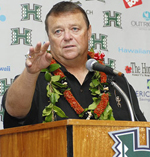 "I know most of the coaches in the country are rooting for us to beat Notre Dame," McMackin said. "Charlie gives this talk, 'We do something special at Notre Dame,' and (the players) get up and they do this little cheer ... this little faggot dance."

The jackass then asked reporters to not write about his use of the word "faggot" and said he would deny it:

"Don't write that 'faggot' down. I was misquoted," he said. "Just please ... cover for me," McMackin said Thursday. "Go ahead, say ‘faggot dance.' No. Please cover for me on that, too - right Karl? I'll deny it. Anything else?"

Thankfully, the journalists in the room ignored his request and reported on the issue. Fifteen minutes later, the coach was back to apologize for being caught:

I want to officially, officially apologize. Please don't write that statement I said as far as Notre Dame. The reason is, I don't care about Notre Dame. But I'm not a ... I don't want to come out and have every homosexual ticked off at me. You know what I mean. Because I don't have any problem with homosexuals. But I apologize for saying that and I'd appreciate it if you wouldn't run that word. If you said dance, that's OK. But don't use the bad term that I chose, please. Thank you.

Once the Hawaii athletic department got hold of him, he later added another apology, this time proclaiming nothing but respect for homosexuals and Notre Dame. I'm not going to post the content here because it's another bullshit non-apology.

Is he crazy? First he uses the term "faggot," then he calls us "homosexuals," which is usually code for "I have a problem with gay people." When the words come out of his mouth that casually, you know he's yelling "fag" this and "sissy" that at his players. Hopefully the university that years ago dropped "Rainbow" from its "Warriors" nickname because it was too gay will force him to a real mea culpa and a little sensitivity training.

You can reach Athletic Director Jim Donovan at (808) 956-7301 or via email at athdir@hawaii.edu. Other Hawaii athletic department staff contact info, including McMackin's contact info, is here.