Share All sharing options for: Outsports gets Michael Jackson tickets 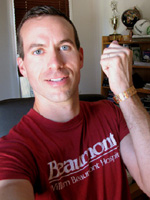 I registered online on Friday for the Michael Jackson Memorial Service lottery figuring I would never win. And when I heard that there were 1.6 million entries and only 8,750 were being selected for tickets (that's a 1 in 183 chance), I forgot about it. But last night I got the email: I'd somehow been randomly selected.

This morning I woke up at the crack of dawn (make that 8 a.m.) and headed off to Dodger Stadium expecting a three-hour wait to claim my ticket. Instead, I was met by a couple hundred police officers and a couple hundred more personnel dutifully pointing me into the parking lot. And, as one woman said, it was "faster than a McDonald's drive-thru."

It was true. I never had to leave my car. When I got to the front of the line, a woman stepped to my car window and placed a gold wristband on my wrist. "If you even try to take this off before tomorrow, we'll see it in the wristband and you won't get in." She handed me a second wristband for my guest and a young man handed me two tickets to Staples Center: Section 16, Row 9, Seats 1 & 2.

It kind of feels like Charlie and the Chocolate Factory, with the eccentric, magical icon handing out golden tickets. I was just a 9-year-old kid in rural New England playing my first album, Thriller, over and over and over, learning the words to P.Y.T. and Human Nature, and somehow I got a pair of tickets and will be at Jackson's memorial service. As long as the wristband doesn't tear off during my Ultimate Frisbee match tonight. I'll be Tweeting on Twitter tomorrow before, during and after the service, so join me there.