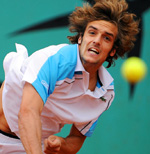 French tennis player Mathieu Montcourt, ranked 119th in the world, was found dead by his girlfriend in Paris. Montcourt had been suspended for betting on other tennis matches and fined $12k; that suspension took effect on Monday. He had bet a whopping $192 on 36 tennis events.

Reports are that he died of natural causes, which would be one of the most bizarre coincidences I've heard in a long time.