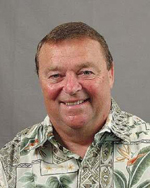 The University of Hawaii handed down a multi-pronged action against football coach Greg McMackin for his "faggot" comment at a Thursday press conference. Among other things, the coach is suspended without pay for 30 days, will have his salary reduced, and will participate in various pro-gay-tolerance initiatives. You can see all the details here.

I love that he is going to now be promoting understanding of gay people and the language that hurts them. And I liked the language they used in their press conference. I also liked how quickly (about 24 hours) they acted on it. Good moves by the coach and the school.

More, plus video, after the jump.

But suspending him? That just seems like it goes too far. But wait! He's suspended but will be allowed to continue to coach the team for free for the next 30 days. Huh? Doesn't suspended mean you can't participate with the team? And forcing him to a reduction in salary? Seems odd to me.

In other news on this, Notre Dame coach (at whom the "faggot" comment was directed) got some personal revenge, able to attack the man who was belittling him:

After seeing the video of his fifth apology, I think he is truly remorseful and I will be hoping he follows through with his commitment: He'll certainly have a fan in me if he does!