Share All sharing options for: Homophobia rampant in English soccer 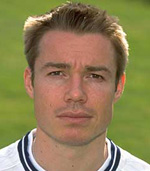 Graham Le Saux was the target of antigay taunts.

A poll of 2,000 soccer fans in England found that "70% had heard anti-gay abuse in grounds in the past five years and more than half felt authorities did not do enough about it." A majority also thought that homophobia from fans is what keeps gay players in the closet.

"No one will ever come out - I've a mate in League One and he won't come out. He's worried about his transfer fee," one semipro player said in the survey, according to U.K. Gay News.

The use of homophobic slurs, often as part of a chant, is disturbingly common at English soccer matches, directed at players either perceived to be gay or just hated enough by opposing fans ("He’s big, he’s black. He takes it up his crack," was chanted to Sol Campbell last year).

Former England star Graham Le Saux, who was repeatedly taunted after rumors wrongly labeled him as being gay, said: "The homophobic taunting and bullying left me close to walking away from football. I went through times that were like depression."

The survey was commissioned by the gay rights group Stonewall, which recommended that fans who use homophobic slurs receive the same sanctions as those who use racist slurs.

The most interesting finding to me is that 63% of respondents think that gay players stay closeted out of fear of homophobic abuse from fans. Only 15% think it is because teammates would not want to play on the same team with an openly gay player. In the U.S., the reaction of teammates is most often cited anecdotally about why gay pro jocks stay closeted.

The Premier League has vowed to clean up the homophobic abuse by fans at games, but the founder of the Gay Football Supporters' Network, Darryl Telles, told the Daily Star: "I am a Spurs season ticket holder but I only attend matches with 12 other gay supporters. I'd feel unsafe with any less."

You can read the detailed survey and report here.