Stallworth gets a year. Is his career over?

Share All sharing options for: Stallworth gets a year. Is his career over? 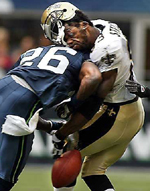 Cleveland Browns WR Donte' Stallworth was suspended without pay for the season by NFL commish Roger Goodell. And deservedly so. There are few actions an NFL player could take that are potentially more damaging than drunk driving: And to have Stallworth's incident end in the death of a man sealed his fate. Good for the NFL for throwing the book at him. Also, good for Stallworth for accepting the suspension and using it, as he said in a statement, to "reflect." You can follow him on Twitter while he reflects.

Does this signal the end of his NFL career? He's been with four teams now, and he's never lived up to his much-hyped "potential." He'll be almost 30 when he is able to step on the field again. My guess is he's got some juice left in the tank, but his chances of ever being that No. 1 receiver are over.