Share All sharing options for: Landon Donovan has swine flu 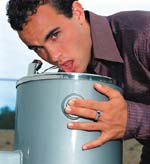 After losing 2-1 in a World Cup qualifying match in Mexico, American soccer star Landon Donovan has confirmed he contracted swine flu (now known as H1N1) while there. Now this piece of brilliance from Donovan, about whether he'll play in the L.A. Galaxy's next game: "If I feel well there's no reason why I can't play." Um, how about not giving the flu to anyone else? Is that a reason? He even said, "The [doctors] don't know a ton." Yet he's going to run out there as soon as he feels better. Hopefully he does feel better soon...and stays away from everyone else until he doesn't have it anymore.

Anyone else want to go to Mexico?