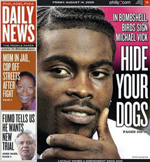 For those who haven't come across it yet, Joe In Philly has a new blog called, well, "The Joe In Philly Experience!" And as is often the case, Joe was spot-on in his reaction to Michael Vick last week, pointing out the great hypocrisy in the Eagles' undying "everyone deserves a second chance" mantra now that they're facing angry fans and some angry members of the media. If you remember earlier this year after Brian Dawkins was let go . . .

So, a guy with a physical impairment who was lucky enough to work on game days at the stadium for his favorite team, makes a stupid comment on Facebook and is coldly and swiftly fired. His comment wasn't against the law. It just made the thin-skinned Eagles mad. In their eyes, he doesn't deserve a second chance but someone who spent two years in jail for his involvement in the mistreatment -- and flat-out murder -- of dogs does deserve a second chance.

During the press conference, one reporter actually tried to ask about the treatment of Leone compared to the acceptance of Vick, and was brusquely shut down by Reid. "This press conference is about Michael Vick," he blustered.

Between the Vikings and the Eagles, is there any way two teams could go 0-16?