Share All sharing options for: Tim Tebow shirtless in GQ

Via Deadspin comes word of Florida quarterback Tim Tebow's photo spread in GQ. The photos GQ posted online include one of Tebow shirtless (below), but Deadspin reports on one it says is only found in the print magazine:

The lurid full-page centerfold of a sweaty, shirtless Tim Tebow is positively filthy .... and comes with drooling prose to match.

Jason Fagone, the writer of the Tebow piece, gushes like a teenage girl (or gay boy) over Tebow's body:

Tebow is six feet three and 245 pounds, all thick polygons and smooth flat planes and inescapable corn-fed handsomeness. He's wearing a billowy white shirt and loose-fitting jeans that somehow only underscore the solidity of his bulk, like a tarpaulin draped over a concrete pylon.

His chin is stubbly. He smells strongly of deodorant, and his thick-lashed eyes are impressively serene, considering that a mere forty-five minutes ago, back in the Florida weight room, Tebow was grunting next to a painted slogan that read pain is weakness leaving the body, doing calf raises with a 300-pound offensive lineman sitting on his shoulders. (In the weight room, Tebow wore a blue spandex shirt with an orange flame crawling up the sleeve; everyone else was in gray.)

The story also delves into Tebow's intense religious beliefs, his impact on college football, his odds of making it in the NFL and ... oh hell, what do we care? We just like the shirtless shot by Mark Seliger in the online photo gallery: 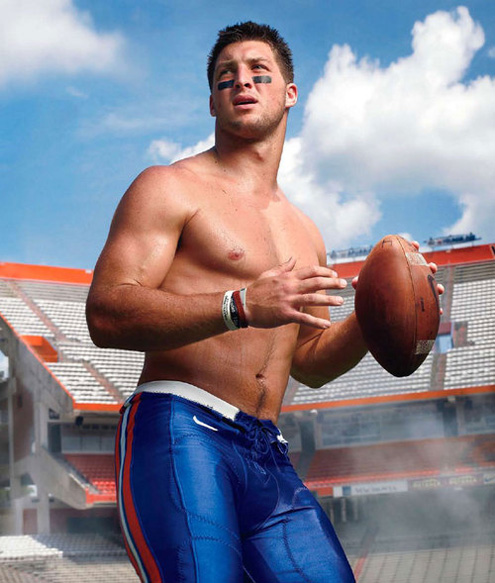