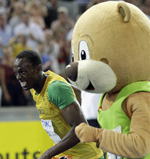 Usain Bolt demolished the world record in the men's 200 meters, running a 19.19 to win the gold medal at the World Track and Field Championships in Berlin. The old record, held by Bolt, was 19.30; to shave .11 off the mark is amazing. Bolt beat the second-place finisher by .62 seconds, the largest margin ever in a 200-meter world championship. Bolt's last five championship races have resulted in five gold medals and five world records.

In watching it live, I was impressed again by how easy Bolt makes it look and how much fun he has. After the race, Bolt twice posed with the Berlin Bear mascot doing his signature 'Lightning Bolt" pose, then he did a mock race with the bear. He really gets into the moment and his charismatic personality shines through.

Related: Cyd on why everyone should love Bolt.