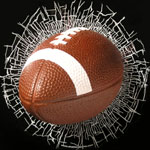 ESPN is reportedly ready to announce that it will broadcast the Sept. 12 USC at Ohio State football game in 3-D, available at several outlets in L.A., Ohio and...Texas. This is the latest foray into 3-D sports. According to the L.A. Times:

Last season the San Diego Chargers-Oakland Raiders game was broadcast in 3-D in a limited number of cities and by invitation only, and the Fox broadcast of the Bowl Championship Series national championship game between Florida and Oklahoma was shown in 3-D in more than 100 theaters across the country.