NFL Shop has Vick jerseys for your dog

Share All sharing options for: NFL Shop has Vick jerseys for your dog 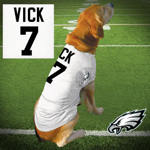 A couple years ago we uncovered a delicate issue with the NFL's Shop that wouldn't allow people to put the word "Gay" on a customizable NFL jersey, despite the fact that one of the League's player was named Randall Gay (they have since corrected the problem, though they still do not allow "Lesbian" or "Queer"). Gay, like about 1,100 other words, had been banned by the NFL because the words were in bad taste.

Now the NFL is allowing people to order Philadelphia Eagles No. 7 Vick jerseys for their dog. You can't order "Bitch." You can't order "Dogkiller" or "Dogfighter." They're clearly aware of the issue, because they have banned the word "Pitbull," but they allow the words "Poodle," "Chihuahua," "Retriever," "Dalmatian" and every other dog name I can think of. Yet they sanction people putting the jersey of a dog murderer on their dogs.

This seems like a real mistake by the NFL. They ban other attempts to make a mockery of the league and their jerseys, and anyone buying a Michael Vick jersey for the dog is just that.

Should the NFL allow people to make Vick jerseys for their dog? It would be easy for them to ban Vick's name from dog jerseys if they wanted to. They clearly take positions on similar speech. Should they stop printing Vick dog jerseys?