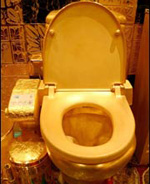 Stanford University's athletic department is facing a revenue shortfall, has had to eliminate 20 positions and may have to cut fencing. What a perfect time for a rich alum to spend $50,000 to $70,000 to build head football coach Jim Harbaugh a private bathroom.

Jim Harbaugh, former NFL quarterback, did not want to walk 20 steps down the hall to the nearest toilet or two floors down to shower, so billionarie John Arrillaga ponied up for the coach's own pleasure palace, according to the San Jose Mercury News.

“It was something I’d asked for,’’ Harbaugh said. “It cuts down on drag.’’

It's not like all other coaches have private bathrooms, as John Wilner of the Mercury News found:

"Pete uses the same men's room as everyone else,'' a USC spokesman said.

Yes, Harbaugh is so incredibly busy coaching that he needs a time-saver when nature calls. The entitlement so many people feel in sports is incredible. While Arrillaga has the right to spend his money as he sees fit, this smells bad at a time when everyone else is being asked to tighten their belts.

Hat tip to the Wiz of Odds.