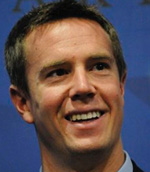 A professor and an economist have ranked the handsomeness of NFL quarterbacks using their facial symmetry to determine how attractive someone is perceived. The winner? Matt Ryan of the Atlanta Falcons. Writes Reed Alborgotti in the Wall Street Journal online:

According to researchers, [Ryan's] face is almost perfectly symmetrical-a trait that shows a strong correlation to a person's perceived attractiveness. While the average person's face is somewhere around 90% symmetrical, Mr. Ryan scored a 99.8%, which puts him in elite territory. Ursinus College professor Jennifer VanGilder and former student Lisle O'Neill, who conducted the study in conjunction with Southern Utah University economist David Berri, said Mr. Ryan isn't the only NFL signal-caller with a nicely balanced face. In fact, every starter in the league scored above 96%.

The story notes, of course, that facial symmetry is not the only measure of attractiveness (New York Jets QB Mark Sanchez ranks #20 among starters and Jessica Simpson's ex-boytoy Tony Romo ranks #23).

Here is the Top 10 based on facial symmetry:

Hmmm, all white QBs. Wonder what that's about?

Of the Top 10, only Ryan and Rodgers (minus his Grizzly Adams beard) do anything for me. I can barely stand to look at Favre, but mainly because he's acted like a dick the past year. The QBs I find the hottest are Brady Quinn, Alex Smith, Joey Harrington and Peyton Manning. Those are my faves, what about yours? And do you buy the "facial symmetry" idea? I find the whole package makes up attractiveness for me, not just the shape of their face.