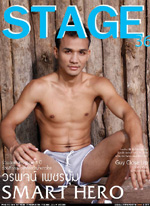 Take a good look at the image to the right. We've seen something like it a thousand times, right? The man in the photo is Thai Olympic silver-medal boxer Worapoj Petchkoom, and Stage is a Thai gay magazine. Because Petchkhoom appears on the cover of said magazine wearing almost nothing, the Amateur Boxing Association of Thailand has suspended him for three months. The ABAT claims that Petchkhoom has tarnished the reputation of Thai athletes with his actions.

Petchkhoom claims he didn't know it was a gay magazine until halfway through the shoot, when his girlfriend caught on after requests that the boxer wear just underwear:

I did not know the magazine would turn out this way...I thought it would be an ordinary fashion shoot. I am straight, with a girlfriend, but the news has upset my family.Since the magazine appeared, another two gay titles have offered me work, but I turned them down. I meant to show my six pack - not my private parts.

It's coincidental timing, as we have been talking the last week about the appearance of Nick Youngquest on The Sex Issue cover of Attitude. It's a stark reminder: Despite the "gay-friendly" reputation of Thai culture, incidents like this can and do happen. Each incident pushed athletes further in the closet (and Petchkhoom isn't even gay!).