Josh McDaniels shows up in a hoodie

Share All sharing options for: Josh McDaniels shows up in a hoodie 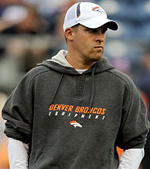 I almost feel sorry for Josh McDaniels. It seems like there's been a problem coming out of the Denver Broncos team every week since the guy took over. The latest isn't the home preseason loss to the quarterback he ran out of town, it's not his comments about Brandon Marshall this weekend: The guy showed up on the sidelines of the game in a grey hoodie. His former boss Bill Belichick has made the grey hoodie a signature of his sideline presence, and now his little protege is following suit. It's a bit much and surely isn't going to ingratiate him with Broncos fans. Luckily, it wasn't a Patriots sweatshirt.