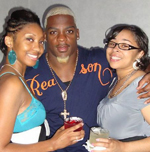 There he goes again. Washington Redskins running back Clinton Portis, the NFL's one-stop shop for crazy press conferences, has again declared that he's not gay: Despite the fact that no one in the press had asked him. He was responding to a question about his recently dyed hair. My guess is he'd heard so much crap about it in the locker room that that's what he was responding to. Either way, here's what he said:

"Why did I go blond?" he repeated. "I just felt like doing something different. You know, I think even with that, from what I hear, now I'm gay? I don't think there's a woman in the United States of America that would say I'm gay. So, you know, I don't hang around men, I don't live a private life, there's constantly people around me. You know, I did it because that was something that I felt like doing. At the moment it was like, 'Ohhh, I want to do something weird and different,' and that's what I did, I dyed my hair blond. You know, it wasn't an attention seeker. I actually was out of the country, I left the country after I did it, so I wasn't even over here once I did it. So it was just an experiment."

I wonder what else he's experimented with.

Still, you gotta love the details of his answer. Of the 150 million women in America, not one would think he's gay? Plus, "I don't hang around men?" Sure he does: He may not have sex with them, but he does hang around them. He wasn't seeking attention? Suuuure. Portis isn't known for seeking attention at all. Finally, he said he was in Berlin "just to see the Berlin Wall" when he did this. A hulking black man with blond hair: He must have fit in seamlessly.