Share All sharing options for: Column decries treatment of gays in soccer 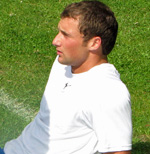 A member of the Seattle Stonewall gay soccer club.

It is still not that common when a mainstream columnist tackles head on homophobia in sports. So it was refreshing to read a strong piece by John Leicester, AP's international sports columnist, where he decried the treatment of gays in soccer. He used as his jumping off point the absurd statements made by Italian coach Marcello Lippi, who said he had never come across any gay players in his 40 years in the sport.

Clearly, Lippi needs to take an eye-opening trip to Milan.

There's a gay soccer team there, competing weekly in an amateur league. The players' sexuality doesn't affect how they play. The ball, after all, is round for everyone.

Last season, Nuova Kaos Milano finished a creditable fourth in its league of 16 teams, not bad considering their opponents frequently try harder against them to avoid the "dishonor" of losing to gay players, says Nuova Kaos defender Klaus Heusslein.

Leicester does a good job of laying out the problems still faced by gay players and makes a great point about the state of the sport in this regard:

That players have their own perfume and fashion lines but still don't feel safe enough to be able to say that they are gay is a damning indictment on the sport. The smoke-filled backrooms may have vanished, but archaic mentalities remain. That was proved by the hooliganism that scarred an English League Cup match between West Ham and Millwall this week, where several hundred people confronted each other and hurled bottles and bricks at police officers. Those likely were the same kind of so-called fans who have taunted players with racist and homophobic abuse.

A lot of what Leicester writes is common to Outsports readers, but the whole column is worth reading. But the AP has so many worldwide clients that his column will be read by people who never gave much thought to the subject. Since I think mainstream media members should be thanked when they hit the mark, feel free to e-mail Leicester your thoughts: jleicester@ap.org