Claim: Semenya is 'a hermaphrodite'

Share All sharing options for: Claim: Semenya is 'a hermaphrodite' 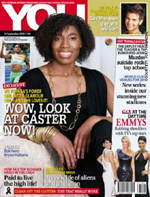 South African runner Caster Semenya, whose gender has come into question very publicly after her victory at the World Championships, is "glamming it up" on the cover of You magazine with the headline, "Wow, Look at Caster Now!" I don't know what she usually looks like out of her running clothes, so maybe she usually lets her hair down and dresses more stereotypically "pretty." Still, it's unfortunate that public pressure has pushed her to feel the need to look a certain way.

Now comes a bombshell: The claim that Semenya is a hermaphrodite with internal testes and no ovaries. The Sydney Daily Telegraph quotes an anonymous IAAF source. If that is the case, the road ahead will be really rough for Semenya. She will likely be stripped of her World Championship medal and her amazing records; And, according to the Daily Telegraph, the IAAF will likely recommend surgery "because the condition carries grave health risks."

I feel for Semenya. She's probably grown up always thinking she was female, not wanting to deceive anyone. At a dinner this past weekend, the issue came up and all of my friends couldn't understand why the "visual test" wasn't enough to satisfy whether the person should compete as a man or a woman. "Does she have a penis or not?" My friend asked. To him, whatever advantage she may have is just like the advantage that Michael Jordan had over everyone else: It was genetic. I see his argument; On the other hand, it's tough because if she's a woman, she's getting a constant natural injection of testosterone. That definitely changes the playing field.

So tough. What would you do if you were track's governing body?